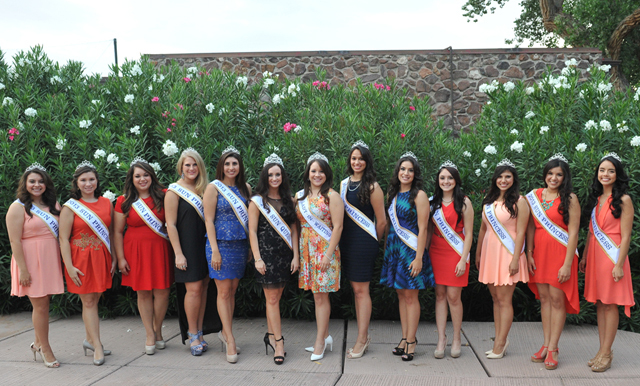 The Sun Bowl Association announces the coronation of the 2013 Sun Queen and Sun Court.

The Sun Bowl Association announced the coronation of the 2013 Sun Queen and Sun Court on Saturday evening at the El Paso Country Club.

Madeline Clark, daughter of Charles and Susan Clark, was crowned the 2013 Sun Queen. Clark is a junior marketing major at the University of Texas at Austin.

Clark is a member of the Alpha Phi Women’s Fraternity, is a mentor recruitment co-chair for Gateway Scholars and serves on the Women’s Business Council. While in Austin, she has worked as a tutor in the Austin Partner in Education program.

She is the founder of the “Head to Toe” charity that gathers warm clothing during the holiday season for local organizations such as Dame La Mano, Child Crisis Center, El Paso Rescue Mission and the Children’s Grief Center.

A graduate of Eastwood High School, Clark was a member of the Mayor’s Top-100 Teens, a recipient of the Kohl’s Kids Who Care scholarship, captain of the Saltatrix Varsity Dance Team and the senior class treasurer.

The 2012 Lady-In-Waiting is Bhriannon Tiscareño, daughter of Rosario Tiscareño. She is a senior mechanical engineering major at the University of Texas at El Paso.

Tiscareño is a member of the Mexican American Engineering Society and the Society of Hispanic Professional Engineers. She has also been a part of the UTEP marching band and steel drum ensemble and is the percussion instructor at Americas High School.

She volunteers her time as youth director, confirmation catechist and the pastoral council at Saint Patrick’s Church. Tiscareño has also been involved with the Austin High School Gear Up Math and Science Tutoring Program, the Sun City Regional Science Fair, the Chapin Senior Symposium and the Lego League-Robotics Competition.

A graduate of Chapin High School, Tiscareño was a member of the Project Lead the Way Engineering Magnet Program, the National Honor Society, the Hispanic Honor Society, and was the section leader of the percussion section of the band.

Judging is based on poise, appearance, personality, communication and interpersonal skills and the ability to demonstrate knowledge of El Paso. Contestants must be enrolled as full-time students. The coronation has been a tradition in El Paso since the first collegiate Sun Bowl game in 1936.