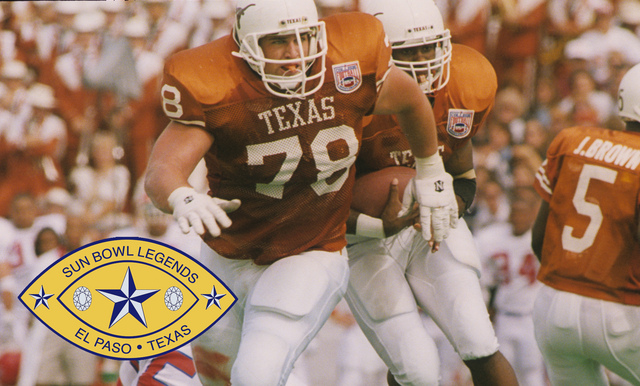 “I still remember watching Blake play in the 1994 Sun Bowl against North Carolina where he helped pave the way for Priest Holmes, another Legend of the Sun Bowl, and lead the Longhorns to victory in one of the most exciting Sun Bowl games ever played. It is fitting that Blake is the first offensive lineman named a Legend of the Sun Bowl.”

“I’m very humbled and honored to be recognized by the Sun Bowl Association,” said Brockermeyer. “This honor is only possible because of the great coaches and teammates I had at the University of Texas. I accept this only as a reflection of our hard work and dedication as a team.”

The Rotary Club of El Paso uses net proceeds to support its annual Children’s Christmas Party (held annually since 1922), which treats some 4,500 Head Start children to a holiday fiesta at the El Paso County Coliseum. Other youth programs include Rotary Youth Leadership Awards and Youth Appreciation Day scholarships.
Blake Brockermeyer • 2013 Legend of the Sun Bowl
A 6-4, 300-pound, athletic and dominant left tackle for the Longhorns and in the NFL, Brockermeyer was a two-time All-Southwest Conference selection who earned first team All-America honors from both the Football Writers Association of America and The Sporting News as a junior in 1994. He was named a semifinalist for the Outland Trophy that year and elected to forgo his senior season to enter the NFL Draft.

While at Texas, he started all 34 games of his career, which ended on a 16-game streak without allowing a sack. In 1994, he helped the Longhorns to an 8-4 record, including a Sun Bowl win over North Carolina.

A starter at left tackle, Brockermeyer was instrumental in the Longhorns’ 35-31 win over North Carolina in the 61st edition of the Sun Bowl game. Leading 21-17 at the half and through a scoreless third quarter, Texas gave up back-to-back touchdowns relenting the lead to the Tar Heels. The Longhorns answered with their own pair of scoring drives as Brockermeyer and the offensive line made room for fellow Sun Bowl Legend Priest Holmes to score four rushing touchdowns and 24 points, tying both bowl records previously set by Thurman Thomas (Oklahoma State) in 1987.

Brockermeyer’s task at the line was not an easy one as he lined up against a pair of All-Americans and first-round draft picks, Marcus Jones and Greg Ellis, culminating a stellar collegiate career with his 16-consecutive game without allowing a sack. He was named the Jimmy Rogers, Jr., Most Valuable Lineman of the 1994 game.

Following that year, Brockermeyer declared himself eligible for the 1995 NFL Draft and was a first-round (29th overall) selection by the Carolina Panthers. He completed his degree in speech communications during his NFL rookie season.

Brockermeyer started at left tackle all four of his years with the Panthers from 1995-98 before signing as a free agent with the Chicago Bears where he started for three seasons from 1999-2001. He played two more seasons with the Denver Broncos before concluding his nine-year NFL career having played in 136 games with 103 starts.

A native of Fort Worth, Texas, Brockermeyer was a consensus first-team All-State selection and one of the nation’s top offensive line prospects out Arlington Heights High School.