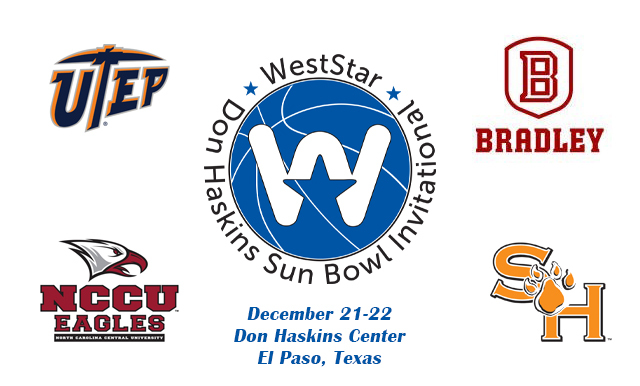 The tournament committee is bringing in teams that have all recently won their conference championships. Joining the UTEP Miners in the Don Haskins Center this year will be Bradley University, Sam Houston State and North Carolina Central.

“We take great pride in bringing a competitive field to the WestStar Don Haskins Sun Bowl Invitational,” said tournament director Barry Kobren. “This year is no exception with teams that will all be competing for an NCAA tournament bid next March. If past success is any indication, we will have a battle to see who wins the championship trophy.”

Bradley is making its first visit to the Sun Bowl Invitational. The Braves have had tremendous success under Coach Brian Wardle. In his first six seasons on the BU sideline, Wardle has built Bradley into a perennial Missouri Valley Conference contender, capped by winning back-to-back championships in 2019 and 2020. Bradley has a history with UTEP having faced them in a memorable NCAA tournament game in 1986. Bradley was led by its all-time leading scorer, Hersey Hawkins, while UTEP’s team featured Jeep Jackson and Tim Hardaway.

Sam Houston State will be making its third appearance in the Sun Bowl Invitational having been to El Paso in 2010 and 2015. The BearKats are led by head coach Jason Hooten, who has done nothing but win since he took over in 2010. He has averaged 20 wins a season and led the Kats to postseason play five times over a six-year period. Sam Houston won the Southland Conference in 2019 and participated in the NIT. The BearKats begin their first season in the Western Athletic Conference this year.

North Carolina Central is making its first appearance in the Sun Bowl Invitational and is led by Coach Levelle Moton, who completed his eleventh season at the helm. In 2019, the Eagles accomplished something that had not been done before in school history as it clinched a third-consecutive NCAA Tournament appearance by winning the MEAC Tournament for a third-straight year. NC Central has appeared in the NCAA tournament in 2014, 2017, 2018 and 2019. This year the Eagle’s basketball team was also featured on ESPN. Chris Paul and Stephen A. Smith produced The Undefeated presents “Why Not Us” an eight-episode documentary series examining the distinct culture, experiences and challenges of a Historically Black College and University (HBCU) athletic program.

The WestStar Don Haskins Sun Bowl Invitational values its relationship with the HBCU’s as this is the 17th time in 22 years that it will feature an HBCU team. The Sun Bowl Association believes this honors the legacy of the Tournament’s namesake, Coach Haskins.

The UTEP Miners under the direction of first-year head coach Joe Golding, bring back leading scorer Souley Boum, who averaged 18.8 points per game to rank third in C-USA in 2020-21 and earn a spot on the 2021 All C-USA third team.

“We have another competitive tournament lined-up for college basketball fans to enjoy,” said Sun Bowl Executive Director Bernie Olivas. “This tournament has become a tradition and the history of teams and players that have come through El Paso is tremendous. Our basketball committee, which is led by Barry Kobren, continues to seek out and work towards bringing quality teams to the Don Haskins Center.”

ABOUT WESTSTAR
Now, as the Borderplex region’s leading commercial bank, WestStar has assets of more than $2.5 billion and employs over 330 team members in branches stretching from Fabens, Texas to Las Cruces, New Mexico. As an active economic driver in our vibrant region, WestStar provides area businesses the capital they need to expand and thrive. In addition to banking services, WestStar also offers an array of financial products, including treasury management, investment, title, and insurance. At WestStar, we take great pride in serving not only as an active economic driver in our region, but also in being a responsible corporate citizen. We want the best for our region, and it drives us to be actively involved in many civic organizations and non-profit agencies through volunteer service, charitable fund-raising, and sponsorships. Our Board of Directors is home to some of the Borderplex’s largest charitable and civic supporters. As individuals, some of us sit as directors on boards, some serve as members, still others volunteer or contribute money. Regardless of our roles, we all share the commitment to serve.