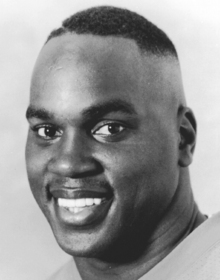 Sun Bowl Most Valuable Lineman
1986 & 1988 (Alabama)
Derrick Thomas was instrumental in Alabama’s 29-28 win over Army in the 1988 Sun Bowl. En route to earning the Jimmy Rogers Jr. Most Valuable Lineman Trophy, he blocked two field goals in the second quarter, broke up one pass and had a total of six unassisted tackles, including two for a loss. At Alabama, Thomas set a school career record with 52 quarterback sacks and 74 tackles behind the line of scrimmage. He was a unanimous first team All-American and won the 1988 Butkus Award. Thomas was Kansas City’s first-round selection and the fourth overall selection of the 1989 National Football League draft. Thomas was the consensus Defensive Rookie of the Year. Thomas appeared in the Pro Bowl nine times. He established Chiefs records with 126.5 sacks, 45 forced fumbles, 19 fumble recoveries, four touchdowns and three safeties. Thomas was twice named the Kansas City Most Valuable Player. He has received the NFL’s two most prestigious humanitarian awards—NFL Man of the Year (1993) and Byron “Whizzer” White Humanitarian Award (1995). While with the Chiefs, Thomas started an inner-city reading program with his Third and Long Foundation. As part of the literacy program, he read to children at local libraries each home Saturday during the season. Thomas died Feb. 8 at the age of 33 while being treated for injuries suffered in a car accident in January.