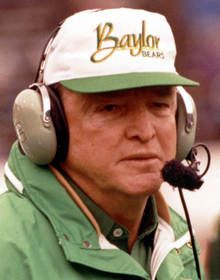 Baylor’s Grant Teaff closed out his coaching career in style, leaving a piece of his legacy in Sun Bowl Stadium. For Teaff, that piece of his legacy came in 1992, when he coached his final game for Baylor University on Dec. 31. Teaff’s Bears came back from a 10-point deficit to upset the University of Arizona, 20-15. Teaff, who currently serves as the executive director of the American Football Coaches Association, compiled a 30-year career coaching record of 170-151-8 at McMurry University (1960-65), Angelo State University (1969-71) and Baylor (1972-92). A 2001 inductee into the College Football Hall of Fame, Teaff led Baylor to a pair of Southwest Conference title (1974 and 1980) and led Baylor to eight bowl appearances. He was named the AFCA and the FWAA National Coach of the Year in 1974. In 21 seasons at Baylor, he was named the Southwest Conference Coach of the Year six times. During his tenure at Baylor, Teaff coached 20 All-Americans, seven academic All-Americans and 114 All-Southwest Conference players. He also coached Davey O’Brien Award recipient Mike Singletary (1979, 1980) and Jim Thorpe Award honoree Thomas Everett (1986). After his final game in 1992, Teaff served as director of athletics at Baylor until 1994, when he became the executive director of the AFCA. He has been named one of the most powerful administrators in college athletics by both the Sporting News and Street & Smith’s Sports Business Journal.