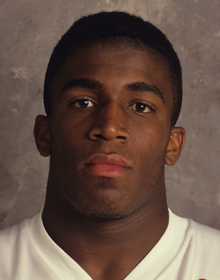 If ever one guy made a single difference in a game, Priest Holmes may have been that guy. In what was voted as the greatest game in the history of the Hyundai Sun Bowl, Holmes put the hopes of Texas on his back and carried the Longhorns home to victory over the North Carolina Tar Heels, 35-31 on Dec. 30, 1994, in front of a then-record crowd of 50,612 fans. For his efforts that day and his contributions to the game of football, Holmes became the 25th member of the Legends of the Sun Bowl. Texas led 14-7 midway through the second quarter and 21-17 at the half, but a pair of fourth quarter Tar Heel touchdowns had seemingly put the game out of reach for Texas, as North Carolina took a 31-21 lead with just over nine minutes to play. Like a locomotive, Holmes gained momentum as the day went along. He rushed five times for 36 yards in the first quarter and carried the ball four times for 29 yards in the second quarter. He carried the ball six times for 45 yards in the third quarter and added 12 carries for 61 yards in the fourth quarter. Holmes finished the day with 27 carries for 161 yards and tied the Sun Bowl record with four touchdowns. His efforts earned him the C.M. Hendricks Most Valuable Player Award. He capped an eight-play, 68-yard drive with 6:35 remaining with a nine-yard run to pull the Longhorns within three points. After another defensive stand by the Texas defense, eight of the 10 plays on the game-winning drive went to Holmes, who scored from five yards out. When he completed his Longhorn career, Holmes had rushed for 1,276 yards on 252 carries and 20 touchdowns. A member of the Texas Hall of Honor, he signed as an undrafted free agent with the Baltimore Ravens in 1997. Holmes played in the NFL with Baltimore (1997-00) and Kansas City (2001-07). He was a three-time Pro Bowl selection, who rushed for 8,172 yards during his 10 seasons in the NFL and accumulated 11,185 all-purpose yards. He was the 2002 NFL Offensive Player of the Year and played in Super Bowl XXXV with the Baltimore Ravens. A native of San Antonio, he is the father of two sons, De’Andre and Jekovan.