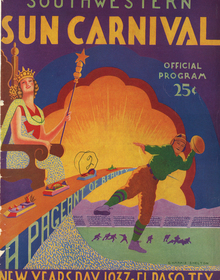 The Texas College of Mines (now UTEP) made its first of eight Sun Bowl appearances and is the only school to appear at all three Sun Bowl locations — Jones Stadium, Kidd Field and Sun Bowl Stadium.

Hardin-Simmons University was making its second straight Sun Bowl appearance after a 14-14 tie with New Mexico State in 1936.

The Cowboys came to El Paso with a vaunted rushing attack that averaged 26.5 points per game, while giving up just 3.5 points per outing.

Burns McKinney of Hardin-Simmons opened the game with a 54-yard run, but HSU could not capitalize on the initial drive. But the Cowboys were not held scoreless for long, as Si Addington swept around the end of the line for a 13-yard score on the first play following a blocked punt on the next series.

The Miners responded in the second quarter, when O.P. May hit Boyde Arnold for a 40-yard touchdown. The extra point failed and HSU still led 7-6.

From that point forward, it was all Hardin-Simmons, as the Cowboys scored 27 unanswered points, including touchdown runs by HSU All-Americans Ed Cherry and Pete Tyler to run away with the win.

HSU’s Addington led all rushers with 142 yards on 16 carries, while Cherry ran for 83 yards and Tyler added 62. McKinney added another 61 yards on four carries, but had to leave the game in the first half due to injury.

The win gave Hardin-Simmons a 9-2-0 record on the season, with its only losses coming to Southwest Conference foes Baylor (13-0) and No. 1 Texas A&M (3-0). UTEP closed out the season 5-3-1. The Hardin-Simmons roster also included legendary high school coach Gordon Wood, who would later take the Wing-T offense to 396 career wins and 11 state titles in 43 seasons as a head coach in the state of Texas.