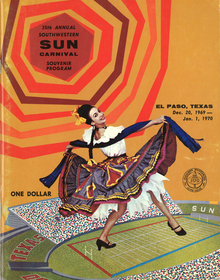 Although the Sun Bowl traditionally has close matchups, the Big Eight Conference co-champion and No. 14th Nebraska (8-2) completely dominated the Georgia Bulldogs 45-6.

Jeff Tagge ran in for one more Nebraska touchdown before the score settled at 45-6 in favor of the Cornhuskers.
Quarterback Van Brownson led the Cornhuskers and completed 11 of 18 passes for 109 yards and two touchdowns. Nebraska finished with a 355-185 total offensive advantage over the Bulldogs.

Two coaching legends were matched up in this 1969 game – Nebraska’s Bob Devaney and Georgia’s Vince Dooley.

The Sun Bowl was the first of thirty straight bowl appearances for the the Nebraska Cornhuskers, an NCAA record.