EL PASO, Texas – The Sun Bowl Association has teamed up with the Southwest Flag Football League to host a multiday tournament with monetary prizes available for the victors.

“The Sun Bowl Association is happy to announce the introduction of the Inaugural Sun Bowl Flag Football Tournament. The Association is always striving to produce events for the community as well as providing some positive economic impact for our city,” said SBA Executive Director Bernie Olivas. “We are anticipating drawing many out of town teams to participate and compete against our local teams in this new and exciting event that is open to both men and women alike.”

The deadline to register for the tournament is Friday, July 30 or until the bracket is full, whichever comes first. All entry fees are $300 which includes all referee fees.

“This is very exciting for me to be part of another Sun Bowl event that brings so many people together to showcases El Paso, our community’s hospitality and the Sun Bowl Association,” Sun Bowl Association Special Events Director Joe Daubach said. “Partnering up with the Southwest Flag Football League in this new adventure will not only benefit our local Flag football teams but it will give El Paso an economical boost through teams traveling in from all over the region.”

Tournament Chairman Adrian Morales said, “It is a huge honor for me to be part of such a great organization like the Sun Bowl Association while at the same time strengthening our local flag football community. Giving them an opportunity to compete against teams from California to East Texas and from Colorado to interior Mexico is energizing. This tournament will give them that opportunity.”

“Thanks to the partnership with the Southwest Flag Football League, we believe this can become another long-lasting staple on the Sun Bowl calendar,” Olivas said.

Executive Director Bernie Olivas and CBS administrators decided to move the kick-time up from the original 12 p.m. (MT) kickoff due to the College Football Playoff Semifinal games being played on the same date.

CBS Sports is presenting a total of 21 games with their final game televised being the Tony the Tiger Sun Bowl. Other notable games on CBS include a rematch of last season’s SEC Title Game between defending National Champion Alabama and Florida, while the annual rivalry game between Georgia and Florida will take place on Oct. 30. CBS also features college football’s highest-rated television package, the SEC ON CBS.

Olivas stated, “The Sun Bowl Association is very excited to have the game back after a year’s hiatus because of the pandemic and look forward to having great teams from the Pac-12 and ACC back in El Paso.”

Although tickets are not yet on sale for the 87th Annual Tony the Tiger Sun Bowl, please contact the Sun Bowl Association Office at (915) 533-4416 or email office@sunbowl.org for more information. 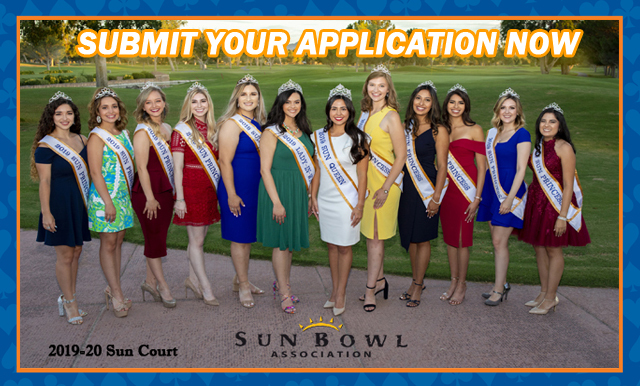 Applications are available online at sunbowl.org and the deadline to apply is Friday, June 18, 2021 by 3 p.m. (MT). All interviews will be held on Saturday, July 10 beginning at 9 a.m. at the SBA Offices located at 4150 Pinnacle Street, Suite 100.

The El Paso area will be represented by the city’s young women to serve as community ambassadors during all Sun Bowl events including the Sun Bowl Parade on Thanksgiving morning and the Tony the Tiger football game on December 31, 2021.

“It is with great pleasure that we are announcing the return of the Sun Bowl Sun Court for the 2021-22 year after a one-year hiatus due to the COVID-19 pandemic. The Sun Court has been an integral part of the Sun Bowl Association for over 85 years and they serve the purpose of being ambassadors for the Sun Bowl Association and the City of El Paso.,” Executive Director Bernie Olivas said. “We look forward to selecting the best possible candidates to fill the Sun Court and continuing this storied tradition.”

The Sun Court dates back to 1935 when organizers planned the event as a companion to the first Sun Bowl game. This is a great time for young women to promote their city and to volunteer as community ambassadors. Contestants are selected based on poise, appearance, personality, communication and interpersonal skills, and the ability to demonstrate knowledge of El Paso and all Sun Bowl Association events. Participants must be full-time students at a college or university and in good academic standing.

For questions, please contact the Sun Bowl Association Office at (915) 533-4416 or email office@sunbowl.org

Eligibility and Rules:
All Sun Princess Applicants must fit criteria in order to be eligible.
•A female between the ages of 18-22 (as of Sept. 1) and have completed one year of college
•Have not been married and have not had any children
•Must be enrolled as a full-time student taking a minimum of 12 academic hours or full time in a graduate program
•A cumulative grade point average of at least a 2.5 on a 4.0 scale (Transcript must be included with application)
•Sun Princesses may not hold any other title during the time they are members of the Sun Court (i.e. Miss El Paso, Miss Texas, etc…)
•Responsible for their own transportation costs to attend mandatory events

Application/Submission Process: Official application, an official transcript, a professional resume, a color head shot no larger than 5×7, and an essay (500 words or less) telling us about yourself; include school activities and awards, community involvement, employment and why you want to be a Sun Princess.

“One of the prime objectives of the Tony the Tiger Sun Bowl is to bring tourism to the city during a time when many people are not traveling. The Sun Bowl Association understands that the cancelation of the Tony the Tiger prevented the city from realizing the economic impact the game usually brings to our city,” Olivas said. “With many individuals and companies hurting during the pandemic, the Sun Bowl Association would like to donate $10,000 to the El Paso Hotel and Lodging Association to help those people in the hospitality industry that lost their jobs because of the Covid-19 pandemic.”

The annual (Tony the Tiger) Sun Bowl game generally has about $14 million to $17 million in direct economic impact to the community in previous years and has reached amounts of up to $25 million, as it did in 2010 when Notre Dame took on Miami. Many, if not all, hotels tend to fill to capacity due to the extra visitors coming to El Paso for the game.

Kellogg’s has already made a large donation to ensure that Sun Bowl gameday workers that were scheduled to work the 2020 game would receive a paycheck this holiday season and also plans on donating one million meals to El Paso food banks.

The Sun Bowl Association anticipates that, with the roll out of the COVID-19 vaccine, the situation will improve and El Pasoans, as well as all college football fans will be able to enjoy the annual Tony the Tiger Sun Bowl on Dec. 31, 2021 in Sun Bowl Stadium.

QUOTE FROM EL PASO HOTEL AND LODGING ASSOCIATION PRESIDENT, MARCO A. ORTEGA
“With the sincerest gratitude, it is an honor to accept this donation for our Hospitality community. Throughout the years, the Sun Bowl Association has demonstrated a deep commitment to our wonderful city and its residents. For many years, your dedication and support has repeatedly played a key role in our success in selling out our hotels during the last days in December. Our industry is thankful for all you have done.

There is no way to fully express our gratitude for your donation to our community, especially during these tough times. We at the El Paso Hotel and Lodging Association are continually inspired by the dedication and generosity of the Sun Bowl Association. It is our hope that this generous donation will help the hotels and their associates that have been negatively impacted due to loss of occupancy. We look forward to a continuing partnership with you.”

QUOTE FROM SUN BOWL ASSOCIATION PRESIDENT, NATALIA FLORES
“I am honored that the Sun Bowl Association and the Tony the Tiger Sun Bowl is donating $10,000 to the El Paso Hospitality industry to supplement lost income as a result of the pandemic.”

ABOUT THE EL PASO HOTEL AND LODGING ASSOCIATION
The El Paso Hotel & Lodging Association is a non-profit organization comprised of General Managers and Owners of hotels, motels, suppliers, service companies, publishers and other businesses actively involved in our area’s hospitality community.

The Sun Bowl Association was founded in 1935 with a threefold purpose: 1) to present a football attraction of national importance, 2) to promote El Paso and the Southwest and 3) to generate tourist income for the area.

On October 18, 1934, at a meeting of the El Paso Kiwanis Club, Dr. Brice Schuller suggested that the club sponsor a football game on New Year’s Day matching an El Paso High School All-Star Team against a worthy opponent. The motion was passed unanimously. It was decided to ask for public suggestions as to the name of this annual game, and the name “Sun Bowl” was submitted by Dr. C. M. Hendricks, who became the first Sun Bowl Association President.

The Sun Bowl football game was first played on January 1, 1935, as a fund-raising event for a local service club, to benefit underprivileged children and to finance improvement to the El Paso High School Stadium. It has grown into El Paso’s number one national attraction. The following year a weeklong schedule of events was added to the Sun Bowl festivities, and four other local service clubs (Rotary, Lions, Optimist and Active 20-30) joined the Kiwanis in coordinating the entire “Sun Carnival” calendar.

In 1936, New Mexico State and Hardin-Simmons Universities were invited to play, and the Sun Bowl has been a college game ever since.