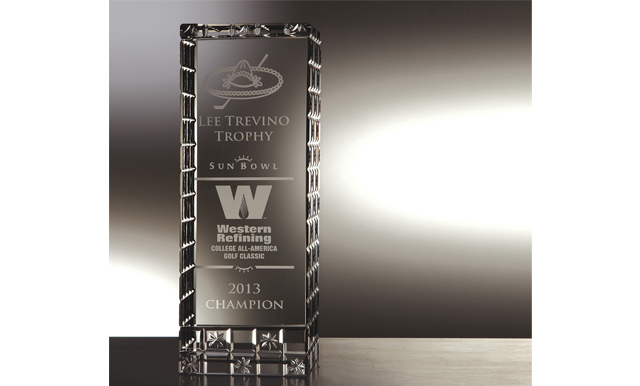 Thirty-eight champions have been crowned throughout the rich history of the Sun Bowl Western Refining College All-America Golf Classic. When this year’s tournament winner walks off the green, he will be the first recipient of the Lee Trevino Trophy.

“Over the last 38 years, this tournament has grown in prestige,” said Gary Hanson, Chairman of the Sun Bowl Western Refining College All-America Golf Classic. “It is fitting that a man that was influential in getting this tournament started, and has made so many contributions to the game of golf, have this trophy named after him. After all, the winner of the tournament known for ‘Where Legends Get Started’ should receive a trophy named after a legend.”

The 1981 World Golf Hall of Fame inductee came to El Paso following a four-year stint with the United States Marine Corps. He became a club professional at the then Horizon Hills Country Club before qualifying for the PGA Tour in 1967. A six-time major champion, Trevino earned 29 PGA Tour victories and was named the 1971 PGA Tour Player of the Year. He became the first golfer to win the U.S. Open, the Canadian Open and the British Open in the same year.

An influential figure in the golf world, Trevino was instrumental in the creation of the Sun Bowl Western Refining College All-America Golf Classic that began in 1974.

“This is quite an honor for someone that did not have the opportunity to go to college,” Trevino said. “The most important thing is that this tournament has donated more than $730,000 in scholarships to the schools represented providing opportunities for others to chase their dreams.”

A philanthropist throughout his career, Trevino has supported charities such as the St. Jude Children’s Research Hospital and the Boys Scouts of America leading him to be named the 2013 PGA Distinguished Service Award.

Trevino was named to the President’s Council on Physical Fitness and Sports, the National Multiple Sclerosis Society Sports Committee and was a 1971 National Christmas Seal Sports Ambassador amongst many other charities in support of the military, children, and shelters for abused women and disease prevention and research.