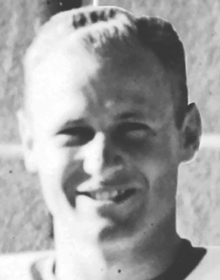 Ken Heineman, who accounted for every point in the first Sun Bowl football game in 1935, was a three-time All-American for Texas College of Mines (now UTEP). He ran for one touchdown, threw for two scores and returned an interception for another in the first Sun Bowl as just a high school junior competing for the El Paso All-Stars. Heineman led the El Paso All-Stars to a 25-21 win over Ranger (Texas) High School following the 1934 football season. The El Paso All-Stars were made up of players from El Paso’s four area high schools at the time – El Paso, Cathedral, Bowie and Austin. Ranger, who was ranked second in the state that year, were heavy favorites entering the game and took a 7-6 lead into the half. The triple-threat star finished the game with 247 yards of total offense and 143 all-purpose yards in that first Sun Bowl. Heineman carried the ball 17 times for 34 yards, but that includes three sacks for a loss of 26 yards. He then completed nine of 21 passes for 213 yards and two touchdowns. Heineman was the first player in Miner football history to earn All-America recognition. Heineman was an All-American in 1937, 1938 and 1939. He was also the first player in school history to be drafted. Heineman was chosen by the Cleveland Rams in the second round of the 1940 NFL Draft.