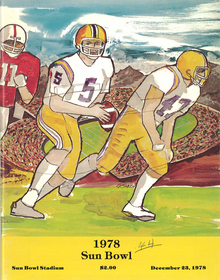 It was supposed to be a battle of two highly-ranked teams, as No. 13 Maryland (9-2-0) faced No. 14 Texas (8-3-0) in both teams’ first visit to the Sun Bowl. Instead, Texas dominated the running game to shutout the Terrapins 42-0, the largest shutout and margin of victory in Sun Bowl history.

In the previous year, the Longhorns lost the national title to Notre Dame in the Cotton Bowl and Heisman trophy-winner Earl Campbell to the NFL. Now, a young and injury-plagued Texas team was taking on Maryland who had just lost 28-24 in the conference championship.

Johnny “Lam” Jones, who had both a touchdown rush and reception, won the C.M. Hendricks Most Valuable Player Award.

The Longhorns out-rushed the Terrapins 224 to 34 yards. Maryland countered completing 43 passes for 214 yards while Texas could only manage seven passes for 45 yards.

Maryland was forced to punt three times in the first quarter for an average of only 33.3 yards and Texas capitalized by scoring a touchdown on each of its ensuing drives. As time ran out in the first quarter, Maryland fumbled the kickoff return to set up another Texas touchdown in the opening minutes of the second quarter.

In the third quarter Maryland was backed up to their own one-yard line and punted three plays later from their six. Punter Dale Castro managed only a 16-yard punt out of Terrapin endzone. The Longhorns punished by driving for a touchdown just three plays later.

When the Terrapins regained possession on the next drive, Texas safety Johnnie Johnson intercepted the ball and “Ham” Jones ran 32 yards for a touchdown two plays later.

Texas had the triple-threat in terms of Johnny Jones — Ham, Lam and Jam. All three had the same name, but were unrelated.