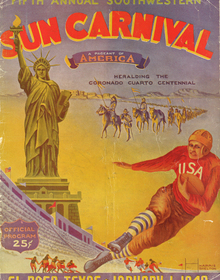 A scoreless tie was the last result anticipated as Arizona State traveled to El Paso for its first ever postseason bowl appearance to meet Catholic University of Washington D.C.

Catholic was held to only six first downs and also lost one fumble. The teams combined for 23 punts and 13 penalties.

The rushing game appeared balanced as Arizona State picked up 205 yards while Catholic carried for 182 yards. Arizona State’s Wayne “Ripper” Pitts was the game’s leading rusher with 15 carries for 89 yards.

Arizona State opened the game with a strong drive that ended on the three-yard line when Bill Davis’ pass was intercepted by Pete Sachon.

In the second quarter, Catholic battled back with a charge of its own after blocking an ASU punt that was returned to Arizona State’s own 14. But the Cardinals were held in check giving the ball back on downs at the ASU 15.

The third quarter featured the two teams exchanging a series of punts.

Near the end of the fourth quarter, Catholic kicker Carmen Pirro was about to attempt a field goal from the 42-yard line, but the officials tagged an offsides call on the Arizona State defense. The five-yard penalty moved the ball closer but Catholic only reached the 30-yard line before they decided to attempt another field goal. The kick sailed wide to the right and Arizona State regained possession.

With neither team able to put together much of an offense and riddled by turnovers and penalties, the game closed with a 0-0 tie.

The powerful Catholic defense posted five shut-outs during the regular season to finish 8-1-1. The Sun Devils closed out the season 8-2-1.