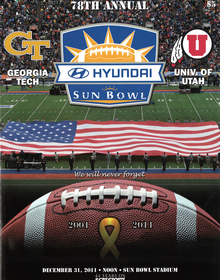 John White IV secured the overtime win for the Utes with an eight-yard run on third and goal. The win marked the ninth time in the past thirteen Sun Bowl games that the final score has been decided by 3 points or less and the first overtime game in bowl history.

Utah had the early momentum as they took a 10-7 halftime lead with a 25-yard Coleman Petersen field goal, with 15 seconds remaining in the first half. This lead would prove to be short lived when Georgia Tech came out firing in the third quarter, scoring on three separate occasions, tallying 17 points to take a 24-10 edge.

The fourth quarter was where Utah, led by quarterback Jon Hays, managed to fight their way back into the game with a pair of touchdown tosses. Hays hit Kendrick Moteai for a three-yard score with almost 7:00 to play to cut Tech’s lead to seven.

With only 1:32 left to play, on fourth-and-fourteen, Hays found DeVonte Christopher in the corner of the end zone to lock up the score at 24 apiece.

However, Georgia Tech used the time it had left to march the field and set up David Scully for a 48-yard field goal that would have won the game with time expiring, but the attempt failed.

After winning the coin toss, Utah deferred possession in overtime, putting Tech out on offense first. After a quick three and out, they settled for a field goal from 34 yards, and Justin Moore nailed the kick to put Tech up by 3. Utah, with the help of Hays and White IV, drove down to the three yard line only to have a false start penalty bring them back five yards. The very next play proved to be the game winner for the Utes, as White IV took it in for the victory.

Hays finished with 193 yard passing with three touchdowns and one interception. White led the rushing attack with 115 yards on 26 carries and one touchdown.

The Yellow Jackets had a strong performance from quarterback Tevin Washington as he completed 11 of 15 passes for 137 yards and one touchdown. Defensively, Tech had a huge play from Quayshawn Johnson, as he had an interception return of 74 yards for a touchdown.

For Georgia Tech, it was the Jackets’ seventh-straight bowl loss and they remain winless in the postseason under Coach Paul Johnson.

The win put Utah 6-1 in postseason play under Coach Kyle Whittingham. He is 7-1 all-time in bowl games as a member of the Utah coaching staff.