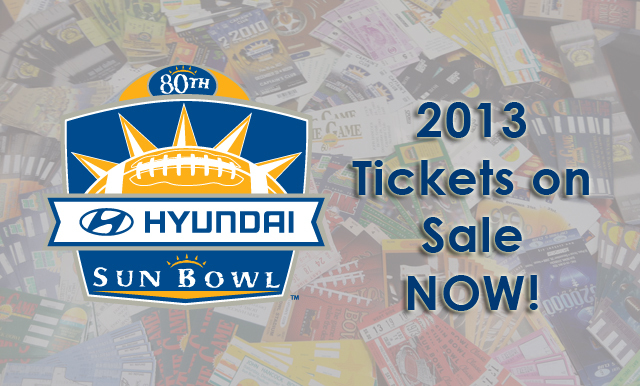 Tickets for the 80th edition of the Hyundai Sun Bowl will go on sale on Monday, July 1, beginning at 10 a.m.
Tickets can be purchased by visiting ticketmaster.com, all Ticketmaster locations or by calling the Sun Bowl Association at (915) 533-4416. Tickets may also be purchased and set up on an annually renewable account by calling the Sun Bowl Association office. Current account holders will receive renewal invoices in late July.

In addition to the release of individual tickets, football fans will have the opportunity to take advantage of the “Me+3” 80th anniversary promotion consisting of four $32 tickets for $80 (plus applicable fees).

“We are looking forward to this milestone anniversary and all the special events surrounding our 80th game,” said Bernie Olivas, Executive Director of the Sun Bowl Association. “Our goal is to sell this game out and have our fans come out to celebrate the nation’s second oldest college bowl game with us.”

With the purchase of each football ticket, fans will be eligible to win one of 80 prizes that will be given away on December 31 to commemorate the 80th anniversary of the game.

This year’s game is scheduled for noon on Tuesday, Dec. 31, at Sun Bowl Stadium and will pit selections from the ACC and Pac-12 conferences. The Pac-12 pick will be this year’s home team.